River2014
ローマ
コロッセオ
Rome, the capital of Italy, is a world-famous ancient city. The urban area of Rome still retains the quaint style, with monuments and ruins everywhere, no new high-rise buildings, and a world-famous tourist city.
To say the iconic sights of Rome, the Colosseum is none other than. The ancient Colosseum has a very long history. It was built in 72 AD, equivalent to 15 years of Yonghan in the Eastern Han Dynasty. Although the Colosseum is still standing still, it still stands for more than 1900 years.
The real name of the Colosseum is called "Flavio Amphitheatre". It can also be called a stadium or an arena. It is oval and has a circumference of 527 meters. The Colosseum is now Rome's most popular tourist attraction, attracting tens of thousands of people every day to visit, where visitors can experience the glory of ancient Rome.
But the Colosseum is still a very cruel building. It is the burial place for countless animals, fighters and prisoners. The opening ceremony of the 100-day celebration killed 9000 beasts, and about 500,000 people have been sent to the "performance". Watching the Gladiator performance was the favorite way of entertainment for the Roman nobility at the time.
As a stadium, the Colosseum provides the perfect model for the future stadium. The stadium can accommodate up to 87,000 people, and its architectural style has influenced the whole of Europe and the world.
お正月旅行年越しに行きたい旅
投稿：2018年12月18日
関連のあるTripメモリー 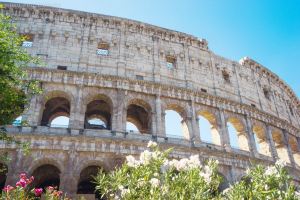 コロッセオ
The Colosseum, which once played a cruel game, has become a famous attraction for tourists.
Mimo Chiu 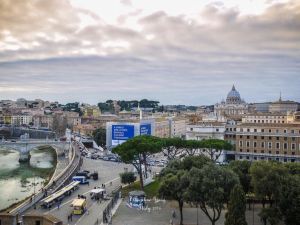 サンタンジェロ城
Roman Holiday Audrey Hepburn is dancing here, just like the fairy world. Yes, here is the Castel Sant'Angelo, Castel Sant'Angelo can go by bus, 982 Road to the Piazza Castel Sant'Angelo station, google map to force. Castel Sant'Angelo front is surrounded by Rome's Tiber River, bridge and the beautiful reflection in the water of incomparable beauty. The central circular Fort is Castel Sant' Angelo friends, was built in the 2nd century AD. When the Roman emperor as their future grave, and later due to historical changes, has become an obstacle to the invasion of the enemy fortress, prison, Palace of the Popes, until now the National Museum. Slowly around the walls of the summit is not tired, all the way there to see the scenery, so no need for the day is cloudy or rainy days and feel pity. Angel panorama at the top of the Fort, the top of the castle erected a statue of the archangel Michael holding a sword when raging everywhere to be against the Black Death.
Angeline Yang 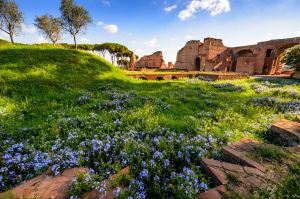 スタディオ パラティーノ
If we say that is a symbol of the Roman Colosseum, then the opposite of the Roman Colosseum birthplace. It is located at the center of seven hills of Rome, is said here in the year 1000 years ago inhabited the city of Rome is now the best-preserved Roman ruins. At that time the nobles are here massive construction projects, princes also palace built here. In height overlooking the entire area of the ruins of houses, pillars are deployed in front of thousands of years time flies. They still spoke of the glory of the Roman Empire in the sun below.
インスタ映えの聖地
歴史を感じる旧跡
旅のインスピレーション
ZIMO 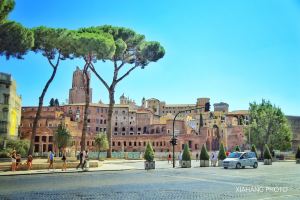 ローマ
Walking along Venice Square is the Empire Avenue, which leads to the Colosseum and the ancient Roman ruins. Imperial Avenue is an important street in Rome. On both sides of the Broad Empire Avenue, the remains of most of the ancient capitals of the Roman Empire are concentrated. The Empire Avenue has ancestral temples including the Senate, the Temple, the niece and some famous emperors, such as the Caesar Temple, as well as the Arc de Triomphe, which commemorates the great achievements of the ancient Roman emperors, such as the commemoration of Emperor Constantine The Arc de Triomphe, built in 312 on the Milwa Bridge to defeat the Nero tyrant. The street performers often see performances on the streets of Rome. The performances are very good. If you feel good, you can vote for money.
ロマンチックな風景
旅のインスピレーション
Hechenwen 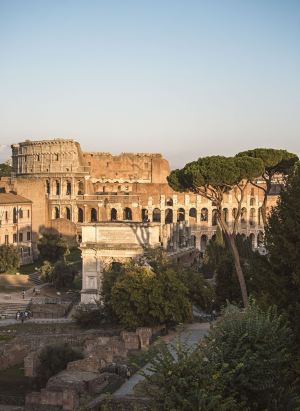 フォロ・ロマーノ
Ancient Roman cities are full of historic monuments, but if you want to visit and explore the earliest forms of ancient Roman cities, you should visit Palatine Hill and Capitoline Hill. This was the downtown of ancient Roman times, with some of the oldest and most important buildings in Rome. Here is the oldest arch in Rome, the triumphal arch of Titus the Great, built by Domitian in 81 A.D. in memory of his brother Titus and his father Vespasian, who first quelled the revolt in Judea. Temple of Antoninus Pius and Faustina: This temple was built by Antoninus Pius in 41 A.D. and dedicated to his deceased, deified wife, Faustina. It is also the best-preserved temple. The Senate: The 3rd century Senate still has its original multi-colored mosaic floor, 300 senators sat on the steps of the Senate and is the Speaker's platform. Holy Road: The oldest road in Rome is paved with flat black basalt, winding through the ancient Roman markets through the Triumphal Gate of Titus to Capitoline Hill. The heroes of the Roman Republic marched here when they triumphantly returned, but gradually it declined and became a gathering place for pickpockets and vagrants. Maxentius and Constantine Great Hall: There are 3 large mosaic arch structures, allegedly the largest building in ancient Rome, built in about 315, this was the legal and financial center of the Roman Empire. Admission ticket Package included in the Colosseum Method of arrival Alight at Colosseo Station on Metro Line B
インスタ映えの聖地
世界遺産
歴史を感じる旧跡
Jinchen_Not_Genius 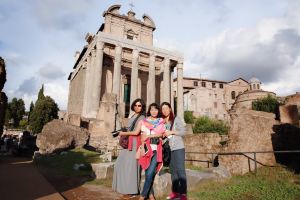 フォロ・ロマーノ
On the right side of the Colosseum is the Arch of Constantine, which bypasses the Arc de Triomphe to the back, the road to the Palatino Hill, next to the ruins of the Roman Forum. At first glance, the white building in Piazza Venezia is not far ahead. Most of the temples now have only the remaining Greek columns. Although the distance is very close, it takes a while for each attraction to take a tour. For those who want to visit carefully, it is best to rent an interpreter or follow a guided tour. Overlooking the surrounding Colosseum, Piazza Venezia and ancient Roman ruins, the view is good.
お正月旅行
12月におすすめ
年越しに行きたい旅
carina 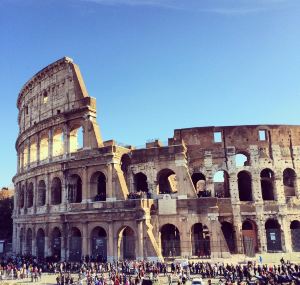 ローマ
As the saying goes, the roads lead to Rome, but the Roman city can not be built overnight. When we visit Rome, we mainly visit Rome's old town. The old town is actually very small. Many attractions are within walking distance. In addition, there are many art museums in Rome. It is necessary to take a bus when it is relatively far away, but it is worth going because it is the birthplace of the Renaissance. Rome also became a place where many people dreamed of because of Hepburn's "Roman Holiday". I imagined that she would eat an ice cream on the ladder, watch people coming and going, and enjoy shopping crazy. Rome's Colosseum site is located in the center of Italy. It is a place used by landlords, nobles, and free people to watch the beasts or slaves. It is very large and is about the same size as the football field. Stand there, close your eyes, you can imagine the cruel picture that used to release the lion beast and fight with the slaves. You can also see the audience cheering, the excitement, just like returning to Italy long and long ago. In fact, you have to feel that a place is rushing through, but you need to calm down and slowly taste. Everyone's way of traveling is different. Finding the most suitable way to travel is the most comfortable. tourism.
お正月旅行
hugo_enen 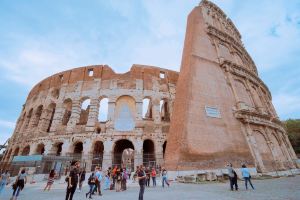 コロッセオ
Such a stunning building is the iconic building of the city of Rome, symbolizing eternity, and in any case is an indispensable stop for the trip to Rome. Standing in front of this monument, you will personally feel and marvel at the heavy sense of the millennium history and the silent record of ancient civilizations, and scream to the four tourists, feel the whole ancient Roman civilization is really present in front of my eyes, tentacles In the place that is accessible, the air that is breathing in the ancient Roman Empire is the air of the ancient Roman Empire. The tall arches and stone pillars ubiquitously display the majestic momentum of this building. The arches just extend the sense of space, and the ears seem to be like Recalling the cruel bloodthirsty battle, killing, screaming, pictures that have been seen in history textbooks have become three-dimensional. Straight into the eye, once belonged to the splendid Colosseum in Europe, after the erosion of history, only the skin is left. Standing here for a moment, the mirage: When the eyes crashed, they were just a drop in the ocean, and they died under the wreckage. I finally realized that Rome was not built in one day.
お正月旅行
年越しに行きたい旅
Blue Tulip 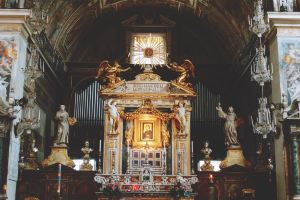 The Basilica of the Virgin is one of the four priests of the Roman Catholic Church. When I came to the door, I saw a soldier guarded with a gun, which shows the importance of this church. Legend: In the midsummer of the fourth century AD, the Virgin Mary dreamed of giving Pope Libero a resume in a snowy place to show the glory of the Virgin. As a result, the next day, the snow fell on the Esquilino hill, and the Pope ordered the church to be established here, which is now the Basilica of the Virgin. In terms of appearance, the Basilica of the Virgin is not surprising, but the interior decoration is amazing and luxurious. The Basilica of Our Lady is the most successful cathedral combining different architectural styles. The baroque dome, the Romanesque bell tower and the Renaissance-style algae well are harmoniously decorated with this building. The church always has such a charm, it has nothing to do with religious beliefs, but it can immediately make people quiet. I think this should be a place for thinking and reflection.
銀幕に映える旅
旅のインスピレーション
Sarah Shan 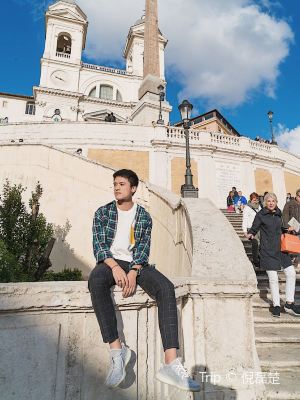 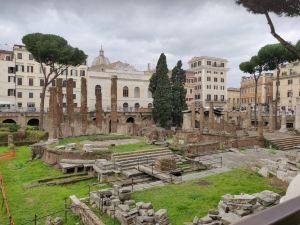 Rome, Italy is full of history. one of the best ways to view the city is on a bike tour. You can see parts of the city that are off the regular tourist path and also spend quality time with your family. It will give you chills to actually see the buildings were history was made so very long ago. #givethanks #familytravel #familyvacation #historicallandmarks #romeitaly #givethanks
親子で楽しむ旅
familytravel
子連れ旅行
givethanks
歴史を感じる旧跡
Plum9195